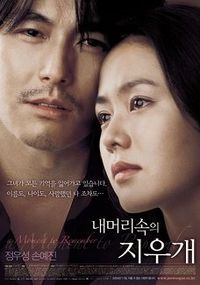 Divided into four segments, A Moment to Remember follows the theme of discovery in a relationship and the burdens of loss caused by Alzheimer’s disease.

The first segment of the film, staged in romantic comedy style, introduces the protagonists, a woman named Su Jin and a man named Chul Soo. The movie highlights their accidental meeting in a convenience store and confusion over a can of soda, followed by their subsequent courting despite the social standings that should have kept them apart.

The second segment follows the couple now settling into married life. Su-Jin learns to be a housewife as her husband cares for her. But as the segment progresses, Su-jin begins to display forgetfulness, including an incident in which a fire breaks out because of a forgotten stove. While Chul Soo caught the fire in time, the seriousness of the incident and others draw them to seek medical help…. (credits to wikipedia)

To view the rest of the summary, go to wikipedia.

I was intending to watch this since last year but I was not in the mood to cry buckets. This movie’s a classic, and after watching it, I know why.

Overall, the movie’s great. From the plot, cinematography up to the actors, you’ll love A Moment to Remember to bits.

I like how the story’s constructed and especially how the actors portrayed their roles. Thumbs up for Ye Jin and Woo Sung for such a remarkable performance. I don’t know but halfway the movie and ’til the end I can’t stop my self from crying, I would bawl my heart out but I’m glad that I restrained myself.

What’s great about this? It’s how two completely different people fall in love and how that love persevere until the end. And on how Chul Soo stayed by Su Jin’s side even if it brings him pain. What a perfect love story.

And for Woo Sung, this is my first movie of his, but I’m starting to become a fan. ^_^ How can he look so rugget but manly and hot at the same time? As for Ye Jin, she’s got an angelic face coupled with innocence, see how this two people end up together (in the movie)?

Mind you, about the Alzheimer’s thingy it’s scary, while I was watching the movie, there’s this part that reminded me of Aya from the jdrama one litre of tears.

I know I’m probably behind everybody, bec. it seems a lot of you have seen this, but if ever you haven’t wathced this, see it now, though it may bring you tears but you’ll also learn a lot about love 😀 Plus there’s a lot of memorable lines, truly, a moment to remember.