At long last. I remember watching Phoenix three years ago as it aired on one of our local channels, what attracted me was this guy on a couch, this scene: 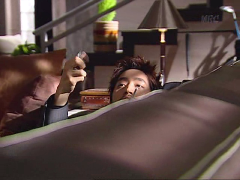 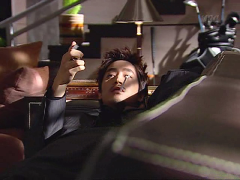 I remember seeing this at the credits, and I was like “bro (yeah, I even talked to him about it), isn’t he the guy in Taste Sweet Love (referring to Lee Wan)” My brother told me no, I keep on insisting that he is Lee Wan (maybe the spiky hair), but after looking carefully, I knew that I was wrong. Thankfully that curiosity led me to watch Phoenix/Firebird. I tuned to it everynight, even though I don’t like Lee Seo Jin. And then I watched this scene:

where in Ji Eun went in a bar in search of his sister, and she found him with Jung Min (eric)

Jungmin was sort of fascinated (i think) to see Ji Eun, and then Ji Eun accidentally slapped him (it was supposed to be her sister). And i dunno, this, aside from eric on the couch, was the scene that I always think of when someone mentioned Phoenix.

Truth is, I 3 years ago, I was not able to watch Phoenix completely, there were episodes that I haven’t seen but more or less I got the gist of the story.

So now, why revived my interest on rewatching it again? Answer: Shinhwa.

I was watching different clips of them and they always mention the line “Do you smell something burning, etc.”, and they showed clips of Bulsae And I thought to myself that I was not able to see that one.

I searched for Phoenix on online streaming sites but was not able to find the first few episodes, and I grew impatient, initially the only part that I’d like to see was the part I mentioned a while back (the bar portion), so to see it I dl-ed the first episode, but I learned that he (eric) was not to appear until the fourth episode, in the end I DL-ed the whole series and watched it with my cousins.

I missed a lot of episodes when I first watched it. Now that I’ve seen it whole I think the story is great. However, as I observed on majority of Korean Dramas I watched, the story gets draggy towards the middle. Phoenix started great (up to the 10th + episode) but somehow, the episodes following it made me think like “Can’t they cut this part out, or fast forward it?”

Despite it, I think Phoenix will remain as one of my favorite Korean Dramas =) The casts were superb. Especially Eric and Jung Hye young (Miran). Not to forget is Eun Ju (RIP) and Seo Jin.

I’ll start with Hye Young. I think, out of all the female villains I’ve seen in kdramas, she is the most evil woman a lead could ask for. Her character’s so hateable, I swear I would kill her the moment I laid my eyes on her (haha, just joking). She’s more than a psycho, everytime Will’s (Seo Jin) on cam, my cousin and I will say “Oh surely, Miran will be there.” She’s worst than Chucky (haha, the doll in Child’s Play). For making me hate her character so much, Hye Young deserves a thumbs up. ^^

ERIC MUN. I think part of Phoenix’s popularity can be attributed to him. I am not being biased here, but with him there, can you not like ‘almost’ every episode of Phoenix? If I’m not mistaken this is his first major acting break (or second?) but I’m sure you can’t help but fall in love with his character. Jung Min (Eric) is every girls’ dream boy/prince charming, etc. He is just so overly romantic. And his lines, gyaaaaaaaa, there were so many classic pick up lines from him. And his acting skills are <3. I should stop praising, this post is turning out to be a love confession to him. LOL

So, if ever you haven’t came across Phoenix, why not give it a try?